What you need to know about the lobster fishery in Seychelles

For the second consecutive year, residents will be able to enjoy the exquisite taste of our local lobsters during the festive season. But before getting to work on your recipe to blow the minds of your guests, how much do you know about the lobster fishery in Seychelles? Are you breaking any laws? Below is the general information that you need to know about this fishery.

General information about the fishery

The spiny lobster fishery has traditionally been managed as a seasonal closure and limited access (license-limited) fishery. This is because fishers primarily exploit the shallow water and coastal stocks, where abundance is limited, thus causing rapid localised depletion with high fishing pressure. In the past, there have been several significant declines of these coastal stocks when too many licenses were allocated, or when the fishery has remained opened for more than three consecutive seasons.

Four main species of lobster are found in the Seychelles waters. 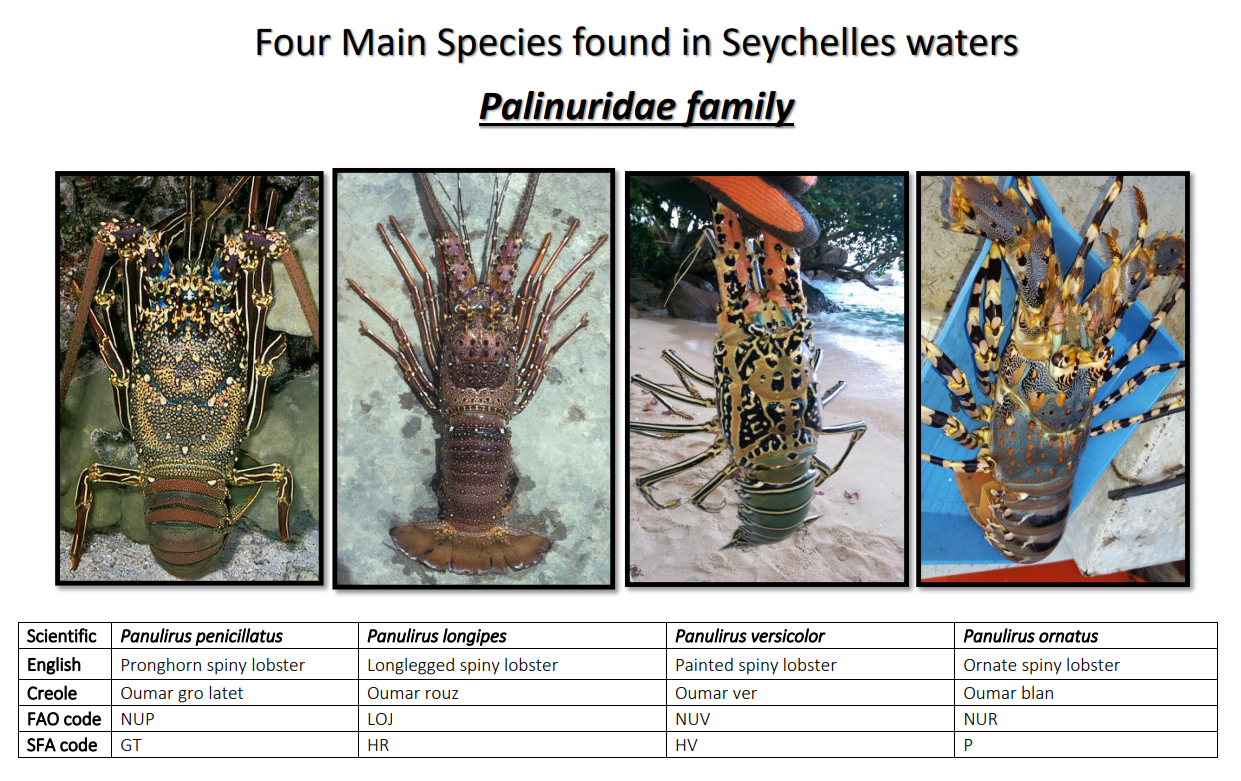 How is the lobster stock monitored and assessed?

For the Fishery Independent Survey, SFA has set up A Participatory Lobster Monitoring Programme (PLMP) which is undertaken annually (in October) at 20 indicator sites around the inner granitic Island to assess the relative abundance of lobsters. Known lobster fishers work alongside SFA’s technicians and scientists to undertake this fishery independent survey and assess stock status.

Based on the results of the analysis of the Catch per Unit Effort and fishery independent surveys or a combination from both, the fishery may be opened or may be closed.   For example, following significant decline in stock indicators, the lobster fishing season remained closed for two consecutive seasons (2017-2018 and 2018- 2019) to allow the stock to recover.

Upon opening of the lobster fishery season, a limited number of licences are issued by the Seychelles Fishing Authority (SFA) to local fishers based on a first come first served basis. Currently there are sixteen (16) licenses which are issued (ten (10) licenses allocated for Mahe residents, four (4) for Praslin and two (2) for La Digue). The licences have underlying conditions that the fishers need to abide to. These include a limit on the number of divers (four divers per license holder) and harvest operation are not to be done in protected areas. For licensees using traps, a maximum of 6 traps are permitted. To add on, license holders shall not harvest lobsters which are less than 7.5cm Carapace length or which are in the berried state (female with eggs). Licensed fishers are also required to provide the Authority with mandatory information.

Consequently, there is a compliance bond of Rs5,000 which is used as a precautionary measure to ensure that fishers comply with their obligations. This compliance bond can be withheld if any of the conditions are breached.

Where can I purchase lobsters?

Lobsters can be bought straight from the fishers themselves or from sale outlets. The general public and sale outlets are informed that they should only purchase local lobsters from licensed fishers and the latter should provide them with an SFA’s sale receipt which should be kept at all times and produced upon request from SFA authorized officers.

What are the main constraints?

So far, the main constraints encountered during open season is that fishers are harvesting individuals that are below the legal minimum landing size of 7.5cm carapace length and the harvesting of females in berried conditions (bearing eggs). The size of 7.5 cm is considered as the size of maturity for lobsters, hence capturing them before they reach this minimum size, deprived them of the opportunity to reproduce to replenish the stock. Similarly, the catching of egg bearing female lobster limit the stock from replenishing.

Poaching by unlicensed fishers and the general public is a major concern for the sustainability of the stock of spiny lobsters. The Authority has noticed an upsurge in poaching events, including blatant posting of photos of illegally caught lobsters on social media. The Authority is doing the necessary to investigate such cases and will be take the necessary actions for prosecution.

What are the legal consequences?

The Fisheries Regulations, 1987 (as amended) prohibits the catching, killing of lobster within the Seychelles waters without a valid fishing license and carry a maximum penalty of R20,000. Furthermore, the failure to abide by the license conditions may result in the revocation of the license.

If an SFA receipt cannot be produced upon request, lobster individuals can be seized and in  most serious cases, prosecution with  fines as much as Rs20,000.

How can you help?

As individuals, you can also play a role in protecting the lobster stock. You can do so by reporting sightings of suspicious poaching activity or suspicious posts on social media and always buy from licensed fishers (as published by the authority) or official sale outlets and more reputable sources. You should always request for a sale receipt upon purchasing.

Help us protect this delicacy so we can continue to savor for many  years to come.